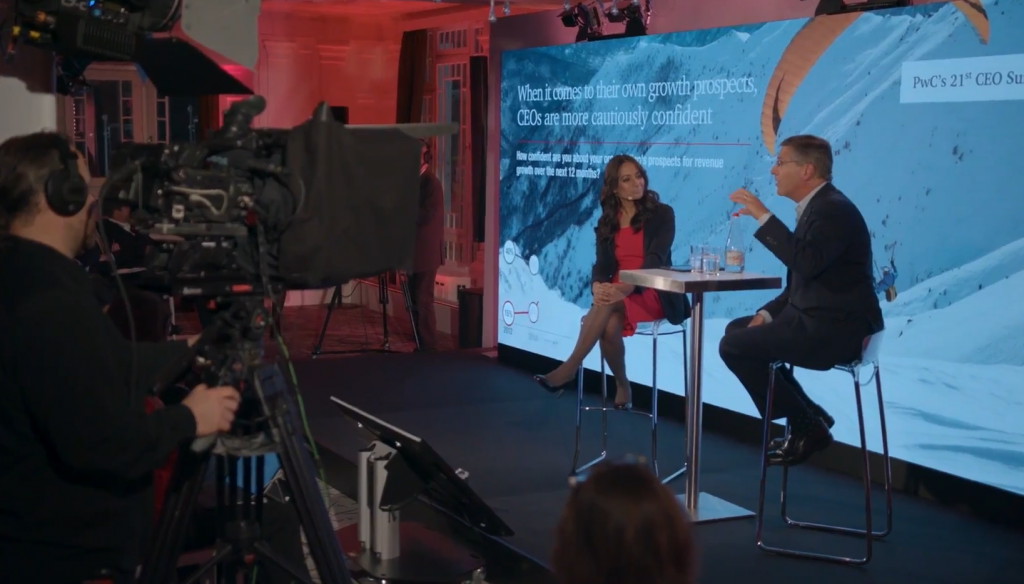 Our TheNewsMarket team has been nominated in the ‘Best use of Live’ category at the Digiday Media Awards Europe. It’s one of the most respected awards ceremonies in the industry and honours the brands, campaigns and technology modernising European media. The team’s been recognised for its launch of PwC’s 21st Annual Global CEO Survey in 2018.

TheNewsMarket was challenged to improve an already established highlight of the World Economic Forum in Davos, Switzerland. The event presents the findings from interviews with 1,300 business leaders in over 80 countries worldwide and is seen as an indicator of worldwide CEO confidence levels. One of the key aims was to increase awareness and visibility of the launch across multi-media channels.

The changes had a clear impact, providing the launch with impressive exposure. On the first day of the World Economic Forum, PwC had a 52% share of voice among its big four rivals and under the #CEOSurvey hashtag it was in the top three topics trending on Twitter. There were 1,808 articles published during the week of the World Economic Forum, including The Times, Die Welt and the BBC. The survey itself saw plenty of interest too – there was a 317% increase in PDF downloads from the previous year.

“It’s been a pleasure to work with PwC on such a prestigious event in Davos, year after year”, said TheNewsMarket MD, Matthew Thomson. “On each occasion we rise to new challenges, refreshing the format to increase viewership and create an engaging event to audiences onsite and online. I’m proud of the team for their 2018 efforts – it’s a well-deserved nomination.”

The awards take place on 9 May at One Marylebone London. We’re in great company at this year’s showpiece, as a host of big brands have been nominated, including Sky, Buzzfeed, The Telegraph and CNBC International.

Get a feel of the 2018 launch in our YouTube video.

For more information on this year awards, take a look at the Digiday Media Awards Europe website